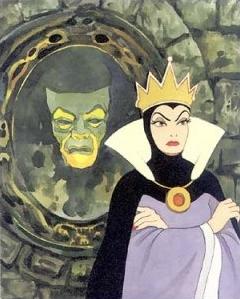 Practicing the ancient art of mirror gazing can be an informative and life changing experience. Mirror Gazing (Scrying), is the ancient technique of gazing into a mirror to try to bridge our world with the spirit realm. Mystics like Nostradamus used variations of this to see into the future, solve problems, and find lost things.

The first gazing was not done with a mirror but used a liquid in a clear or painted bowl or a still lake. It wasn't until sometime in the middle ages when mirrors were invented that mirror gazing started.

Variations of Scrying include smoke, ink in liquid, blood in liquid, obsidian stones, mirrors and any other reflective object. For mirror gazing an ordinary mirror can be used, but a black mirror is recommended by most practitioners. Candles should be lit somewhere in the room for light, but not in view of the practitioner.

Mirror gazing consists of having a thought, object or person in mind and staring into the mirror for as long as an hour. Patience is the key to mirror gazing. It may take up to months to condition your mind to stay on track while staring at yourself for such long periods of time.The idea is to enter a trance also known as the Hypnagogic state. Some sites will tell you to avoid blinking, others to blink. Stare at the mirror, but don't stare. Try everything out and finding what works best for you. The problem with entering the Hypnagogic state is hallucinations can occur. Much like sleep paralysis you can hallucinate without the ability to move.

Trying to view a deceased relative or loved one? It is believed that surrounding yourself  with photos and possessions will help trigger the effect. Concentrate on whatever is decided upon. People have claimed to have been hugged during this exercise.

If you're using this on a paranormal investigation, concentrate on the name of someone who used to be there if you know them. It may be hard to imagine a face if a picture is not provided. Also, unless you are adept in this, you may not see anything at all.

Much like meditation, mirror gazing takes extreme practice and patience. There are different ways of practicing with different results. Due to the resemblance to meditation, the question surfaces is conjuring or communicating during mirror gazing a real occurrence or a product of the subconscious mind? Perhaps further evidence that consciousness is not stored locally in the body?

For more information try this site.http://hermetic.com/norton/ashort.htm