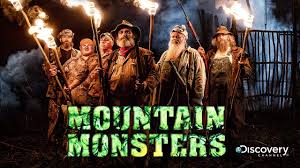 I happened to come across a new show on Destination America called Mountain Monsters. A group of trappers and hunters who call themselves A.I.M.S. go from place to place hunting mysterious creatures. If there's going to be people running around trying to capture the Wolf Man there's no one I'd rather have than hunters and trained trackers and trappers.

On this episode as previously stated, A.I.M.S. traveled to Kentucky to find and trap the Wolfman. Now the fact that they seemed to jump wholeheartedly into believing there is a Wolfman running around instead to ruling everything else out first bothers the skeptic in me. Do I believe in a giant Wolf Man roaming in Kentucky's wilderness? Of course not, but the show did do a good job in selling me on the fact that there is something giant roaming around the Kentucky wilderness.

While watching the show, I did find myself not wanting it to end so I could see whatever it is eating huge deer and dragging it back to its den, and leaving huge footprints all over the region. Next week seems to be a hunt for the Grassman which I am assuming its another name for Bigfoot but I will watching.

*Note: As Mountain Monsters enters season 4, I have viewed this show since season 1. Apparently everyone loves hillbilly's running around shooting things. Has anyone had their eye shot out yet?